There is a story of what took place on the night of the Buddha’s enlightenment.
Prince Siddhartha, who had left his home and palace three years earlier to become a wandering ascetic, finally sensed that his mind and heart were ready for liberation from all suffering, so he sat down under a tree in the forest to meditate, vowing not to get up until he had reached enlightenment.
Maara, the Lord of Death – somewhat the Buddhist equivalent of Satan – sensed that the future Buddha’s enlightenment was near and didn’t like it one bit – Maara didn’t want the Buddha to find a way past suffering. So he came to the tree in the forest where the Buddha was sitting and assaulted him. The stories say Maara threw everything he had at the future Buddha: riding in on an elephant leading ten squadrons of his army, he assumed a fearsome form with a thousand arms; his army also assumed fearsome forms and made eerie noises to scare the Buddha. Maara called down hail, showers of fire, thunder, and even an earthquake but nothing shook the Buddha.
Finally, Maara came storming up and shouted: what gives you the right to ignore my armies and sit there so calmly? Who gave you that seat from which you won’t stir? 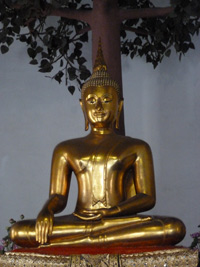 The Buddha didn’t answer, but simply put down the fingers of his right hand and touched the earth. Maara vanished.
Maara is a metaphor for greed, hatred, delusion, and all the unskillful mind states that plague us and fill our lives with suffering.
By touching the earth, the Buddha is answering Maara: He’s saying, I have the right to become free because I live on this earth.
The Buddha’s gesture of reaching down to touch the earth is called, not surprisingly, the earth-touching mudra, and I have always found it one of the most beautiful gestures in Buddhism.
To me, it means

I wonder how many of us – beset by our own demons, our own greed, hatred, fear, confusion, have stumbled upon the simple strategy of going outside. Going on a walk. Remembering who we are, greeting our neighbors, human and nonhuman. Our own “earth-touching mudra.”

As John Muir wrote, “Climb the mountains and get their good tidings. Nature’s peace will flow into you as sunshine flows into trees. The winds will blow their own freshness into you and the storms their energy, while cares will drop away from you like the leaves of Autumn.”

Here’s another traditional story. After the Buddha reached enlightenment, he reportedly sat under the Bodhi tree in bliss for several days, but finally began to think about what he would do next.

He thought that going out to teach what he’d learned would be ‘tiresome and troublesome’ – his radical message of wisdom and compassion would be going against the stream of the way most people thought and behaved. The traditional story says that the great god Brahma magically became aware of what the Buddha was thinking, suddenly appeared before him, and pleaded with him to teach. He said, “There are beings with little dust in their eyes that are falling away because they do not hear the Dharma. There will be those who will understand the Dharma,” said Brahma.

The Buddha heard his argument, agreed, and spent the next fifty years until his death teaching others what he had learned.

In just this way, caring for the environment, especially actively working to avert climate disruption, is going against the stream of our current culture. It’s hard for many today to think of more generous and peaceful ways to live on and with the earth. But we can take inspiration in our work from the Buddha’s decision to go out and teach how to end suffering for the benefit of all beings.

Because environmental degradation and climate disruption will cause immense suffering for all our descendants human and nonhuman if we do not act – especially for the world’s poor. Indeed, we can see that suffering already, including the way a ten-year drought in Syria that drove one and a half million farmers off their land and into the overcrowded cities contributed to the horrific situation in that country today.

It takes persistence and courage to go against the stream towards a more humane and sustainable way to live. But in that journey, we can take inspiration from those like the Buddha and like John Muir, who I like to call our own Scottish-American bodhisattva, who have gone before us. Then when we’re tired and wondering what we’re doing all this for, we can reach down and touch the earth.

(This is a talk given by Anne Macquarie at an Interfaith Thanksgiving Service in Carson City on November 19, 2015.; its theme was Caring for The Earth)